Home Upcoming Events (Big Event Template) 2011 September
Jo Williams from Northampton was our demonstrator for the September meeting. Her title was “A New Leaf”, and she did 4 arrangements which included a wide selection of flowers and foliage. Jo began the evening with an autumn themed design in an unusual container covered in russet coloured leaves. Her materials included a variety of foliage with bloom chrysanthemums and gladioli, and her final touch was a string of Chinese lanterns to run through the arrangement. Throughout her demonstration, and despite microphone problems, Jo continued to give us interesting tips and information about the different garden plant material she was using.

In her second design Jo used 3 very large blue hydrangea heads along with veronica and clematis to depict late summer; the blue of the flowers being lifted by Jo’s choice of Choisya “Sundance” as her main foliage. Her third design was seaside themed and was arranged in a very large shell container which Jo informed us would not be found on a beach but which she had obtained via the internet. She mentioned that she had a passion for ivies and introduced us to Hedera Helix Erecta which she used throughout this arrangement along with sedum and white roses

Her final design was done on an angled wooden stand and was symbolic of the New Zealand Tree Fern. Jo used a selection of leaves to depict the fern and then arranged large white and pink lilies, light pink tinged anthuriums and orchids. Jo then threaded a string of carnation heads through the arrangement before producing a smaller, matching “tree fern” arrangement which she had done earlier 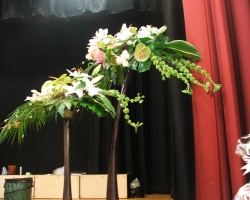 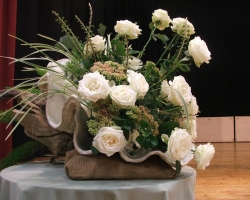 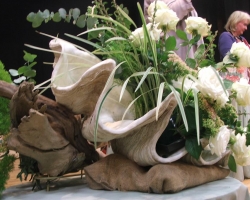 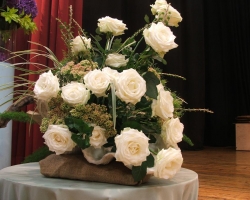 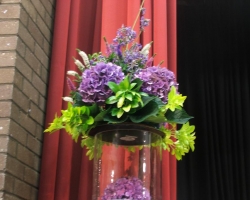 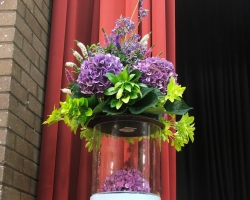 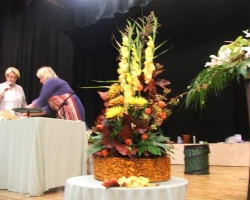 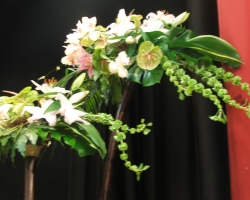