On Thursday 11th April eight BFAS members went to Broxbourne Civic Centre for the Area Members’ Day. The event was well attended which meant car parking problems for some, but once inside there were stalls to browse, raffle tickets to buy and coffee and biscuits aplenty. A buffet lunch was ready at twelve with a varied and tasty selection of sandwiches, nibbles, fruit and cakes. There was more than enough for everybody, but a table to eat at would have been very welcome.

At one o’clock the guest demonstrator Mr Barry Grey from Cheshire was introduced. Barry is an international demonstrator and one of Britain’s most celebrated floral designers. The inspiration for this demonstration was a poem he wrote entitled ‘Gently Flow Upon the Senses’

Much of the foliage for the first design came from the garden despite the late Spring and this was enhanced with bright orange roses grown at high altitude in the mountains of Equador.

The second design was mainly in shades of pink to capture the colours of the dawn sky; pink anthuriums and cymbidium orchids with curled aspidistra leaves.

A terracotta stone urn was the container for the third design. Garden foliage was the basis of a traditional arrangement using orange lilies, orange alstroemeria, pink carnations and yellow gerberas.

The fourth design was more modern and Barry used frames covered in gold metallic  wire and flower tubes to which he added vibrant green Anastasia chrysanthemums and ferns. This design was, Barry joked, for those who preferred ‘a bunch’ rather than a foam based flower arrangement.

Three placements of lemons and sunflowers in wooden fruit crates made up the fifth design, ‘Sweet and Sour’.

The sixth design was made up of sweet smelling flowers and foliage and included ‘antique look’ Columbian carnations and eucalyptus.

The final design, ‘Under the Sea’, was an arrangement of driftwood, white gypsophila, white orchids and white carnations. As he put the finishing touches to the design the hall echoed with John Denver singing ‘You Fill Up My Senses ‘(Annie’s Song).

Barry received a standing ovation from the audience and a heartfelt vote of thanks. Later, Barry told our Chairman that he is looking forward to coming to Bedford next year and promised a stage full of flowers! 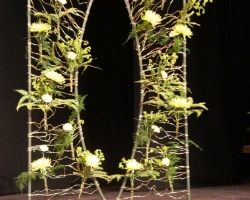 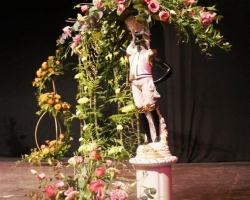 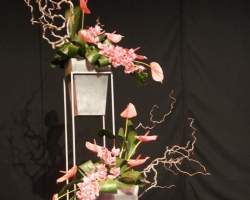 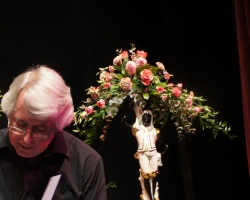 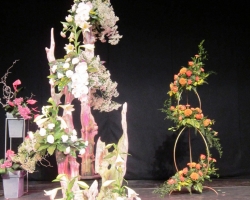 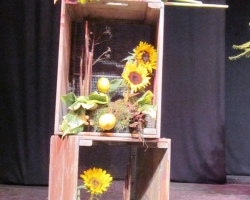 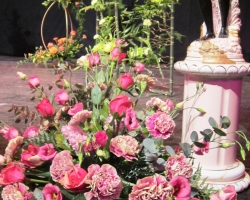 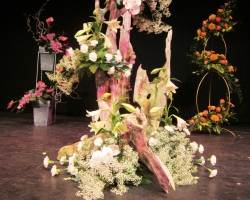 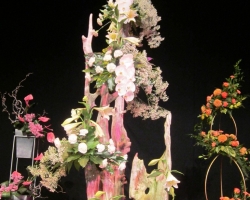 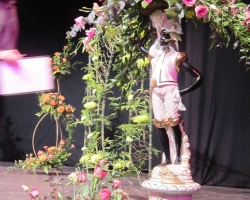 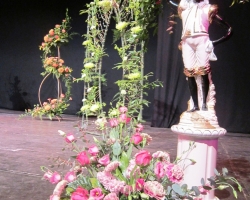 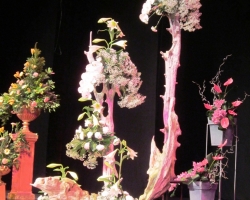 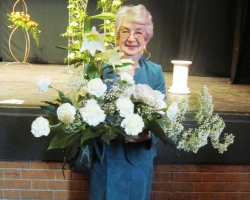 On April 2nd we departed from our usual format of having a NAFAS demonstrator but instead 3 of our Club members each agreed to lead a mini workshop.  Lynn showed us how to make beautiful fragranced ‘flowers’ from slices of citrus fruits, Sandra did a variety of things using just a simple ‘Supermarket’ bunch of flowers and Ann created modern vertical arrangements again with a ‘supermarket’ bunch.  After a break for complimentary drinks and nibbles everyone was invited to have a go at making something using flowers provided by the club.  It was a lovely evening and a few photos are below…. 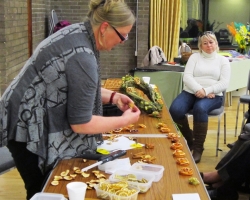 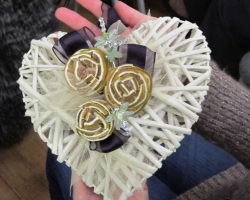 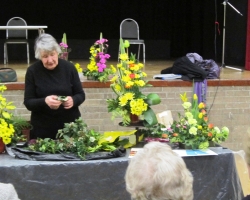 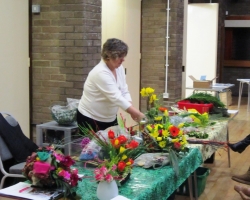 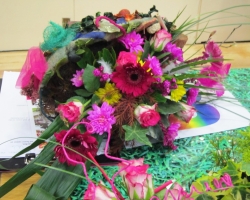 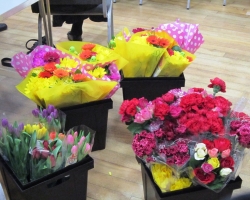 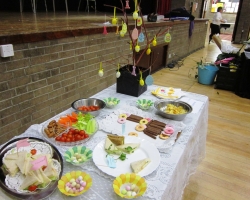