The atmosphere before the meeting was expectant and sociable with lovely refreshments available and the chance to buy from well stocked produce and plant stalls with the sales tableincluding many new items. Thank you to members who contributed items for the stalls and also  helped to  raise funds for our charity.

Michael’s  ‘Autumn Splendour’ presentation produced a stunning stage display and together with his informative and humorous commentary, which was accompanied by music, ensured everyone had a very enjoyable evening.

His first arrangement in typical autumn colours and surrounded by pumpkins and fir cones used viburnum, Chinese lanterns and spindleberry together with sunflowers and carnations.

Michael’s  ‘Polo’ design was a complete contrast to the first with manipulated aspidistra leaves, dracaena and anthuriums.

A parallel style was used for his third design with sulphur heart,  hedera,  philadelphus and forsythia forming the base for  perennial gentians, nerines, Aqua roses, mini kinzi gerbera and poppy seed heads. As Michael put the finishing touches to his design we listened to Edmund Hockridge singing ‘I Leave My Heart in An English Garden’

The winner of the next  design needed a large car to transport it home! It included gladioli, Japanese bog plant, miscanthus, pittisporum, sedum, cabbages, gerbera, Avalanche roses, antirrhinums, and cream carnations – to name a few!  A stunning arrangement which provided a magnificent centrepiece for the back of the stage.

The fifth arrangement was more retro in design ( accompanied by music from The Artist) and a contrast in colour (pinks and  mauves) and included artemisia, hydrangea, abelia grandiflora, statice, carnations, veronica and roses (Cool Waters and Memory Lane). The effect of the arrangement was further enhanced by the props included in the display.

Twisted dried argava  leaves formed the basic shape of the next design with fatsia leaves and Pistache anthuriums.

The inclusion of so many different types of  foliage and flowers was a real feature of the arrangements which were so varied in colour, texture and shape.  The standing ovation for Michael at the end of the evening signified the audience’s appreciation for his  skill, vision and presentation.

A few photographs below give a flavour of the evening but do not always do justice to the intricacies of the arrangements. 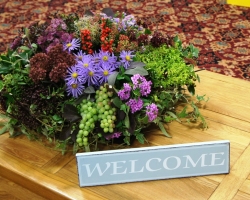 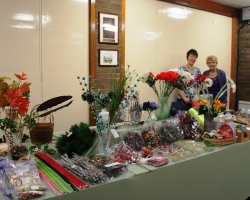 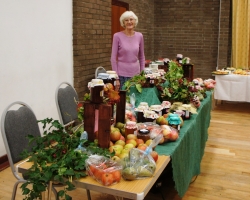 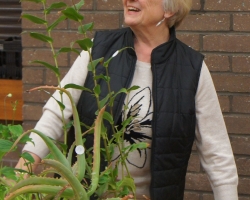 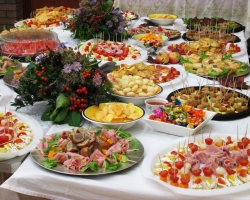 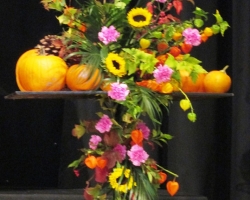 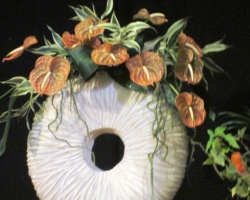 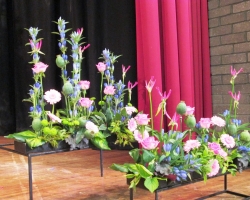 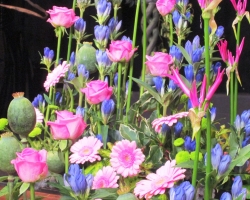 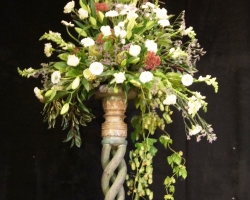 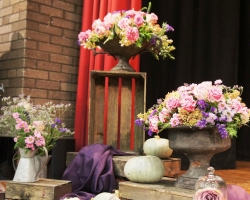 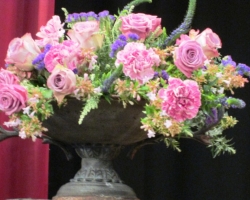 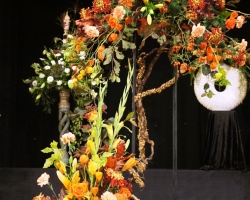 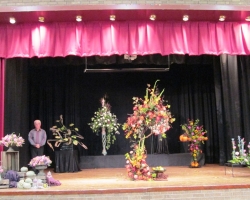 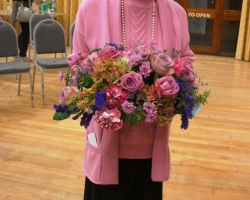