We welcomed Joyce to BFAS on April 1st .  The foliage, almost all from her own garden, provided a wonderful variety of colour and texture as background to the designs in   her  Pic ‘n ’Mix demonstration. I’m sure many of us were inspired to be more adventurous with the foliage we grow and use.

The first arrangement was in a picnic basket. The foliage in this design was from her garden and included   cupressa, sundance choisya, juniper and cristata ‘The King’. The flowers were   peach carnations, spray chrysanthemums picking up the colour of the basket , mini gerberas and roses.  The smaller accompanying design had us reminiscing about pic ‘n’ mix sweets which Joyce had kindly placed at the base for our enjoyment.

The next three arrangements were bold statement containers:  two metal structures and a snake basket. Green balls and black bamboo were used to enhance the metal containers. The  focus of the second arrangement was longiflorum lilies and palms with green carnations, conifer and senecio. The third design was a vibrant arrangement of pink gerberas and anthuriums.  The shape of the design was further enhanced by trimmed trachy palm leaves, variegated box and hypericum with phormium leaves   providing height. Eucalyptus bark gave an interesting texture to the design in the snake basket  together with  contorted willow, phormium  and nadina  domestica. Spray carnations and  orchids were stunning against this foliage.

A parallel arrangement between two pieces of   stylised ladder sculptured wood used Cotoneaster and  dracaena leaves with aliums, tulips and red anthuriums. Paddy’s Pride formed the basis of the final design with stems of cornus   providing  height.The green and white design used green carnations, avalanche roses, Anastasia chrysanthemums, green anthuriums and gypsophila. This arrangement was displayed within a wooden framework which Joyce acknowledged was the handiwork of her husband.

‘Fun with Flowers’ was a phrase Joyce used on several occasions and her enjoyment in floral  art  was reflected throughout her demonstration.

A few photographs  are below with apologies that I forgot to remove the (wrong) date from the pictures. 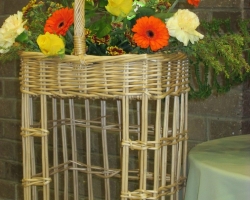 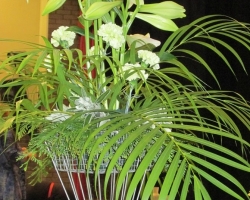 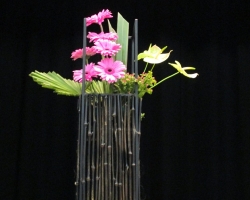 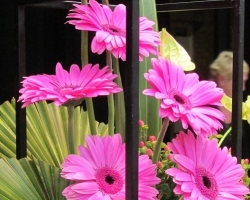 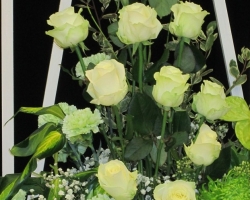 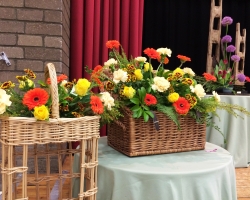 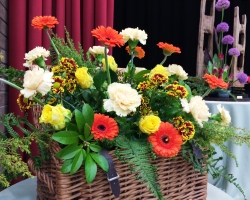 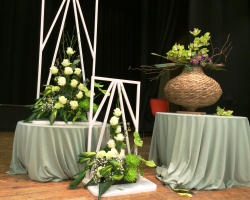 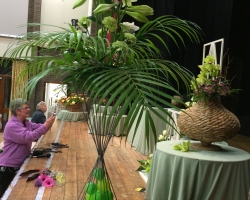