We were delighted Moira managed to escape the chaos of the A14 and A421 to arrive in time to present  ‘The Gift’.  She described her demonstration as ‘traditional with a twist’. Each design represented a special Gift.

The first design, The Gift of Creation, used fatsia, phormium ( both leaves and flowers) aspidistra, artichokes, palms, purple liatris and shamrock chrysanthemums to represent the lush, vibrant and exotic Garden of Eden. Moira created some tension in the audience as she balanced the arrangement on one side of an attractive metal structure.

Adam the Gardener (with blue as the dominant colour ) and Eve using pink were the focus for the next two designs. In the first of these arrangements foliage included spotted laurel, helibore, aspidistra, euphorbia,  steel grass and hosta – several large leaves giving ‘a place of visual calm’ amongst veronica,  lime green spray chrysanths and very large alliums.  Midilino cane work was a feature of the Eve design. Moira used the canes to provide physical and visual movement, link colours and mechanics and to give an enclosed space. Phormium, verbascum, ivy, heuchera, sedum, cupressus, pink variegated photina and baby pink roses were all included, with  blocking used  to give visual impact.

The fourth design was The Gift of Choice . This arrangement had a European influence (‘using everything!’)  – based on a wreath ring covered in ivy,  phormium and aspidistra. Two phalaenopis orchid plants were the main feature with  the root system also used as part of the arrangement. It was finished off by including  apples: the ‘forbidden fruit’.

Next came The Gift of Love a red offset design  using bergenia, phormium, liatris, euonymus, aspidistra and  hypericum as a background for shamrock chrysanths and beautiful red roses

A very enjoyable evening which encouraged us to consider giving our own designs a contemporary ‘twist’. The raffle winners went home very happy! 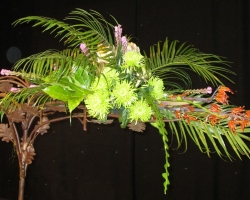 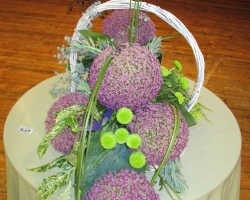 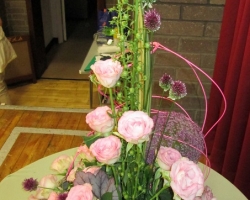 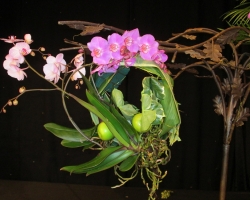 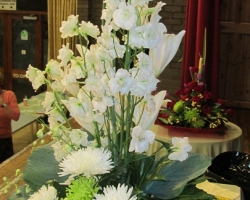