Many flower clubs don’t have a demonstration in August, but at BFAS we have decided that as part of our commitment to education we will offer NAFAS trainee demonstrators and club members an opportunity for additional practise in front of an audience and this year we were especially pleased to welcome one of our own members, Lyn Jones.

Before the demonstration we were wondering about the title -”Memories from the Box” Was it a post box, a jewellry box or maybe a hat box? In fact, it was none of these, Lyn’s arrangements depicted some of the old favourites from the era before flat screen televisions when most homes had a tv set in the corner of the living room that was often referred to as ‘The Box’.

Lyn asked the audience to guess the names of the programmes she had chosen so we can’t spoil the fun for future audiences by giving the answers, but her background in craft and tv makeovers resulted in some original and creatively designed containers and props as you can see in the photos.

As a contrast for her flowers, Lyn used a variety of garden foliage from her own garden as well as some from friends, neighbours and other local sources (those who were there will know where we mean!) Three beautiful large headed white hydrangeas were added to the first design and the second used small tangerine gerberas and scarlet anthuriums. The third arrangement definitely had the ‘bling’ factor and included white carnations, pink roses and a mauve orchid.

For a change, we had refreshments midway through the presentation and it worked very well.

The fourth arrangement was a basket of garden flowers:- pink anenomes, pink larkspur, verbena, white agapanthus, michaelmas daisies and pink roses. For the next design, fatsias and ferns suggested a lush tropical feel and orange lilies completed the effect. The final arrangement reflected romance and centred around a large silver candelabra with foliage that complemented the beautiful red roses.

Well done Lyn and thank you for a lovely evening. 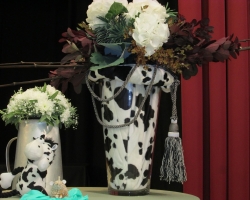 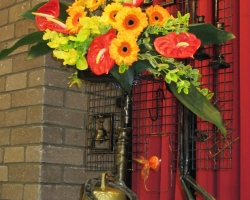 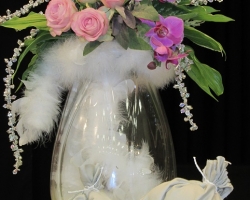 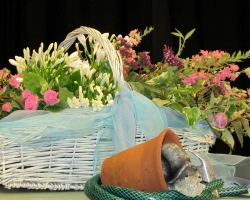 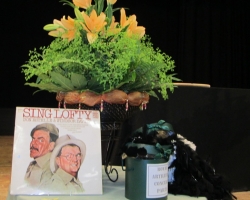 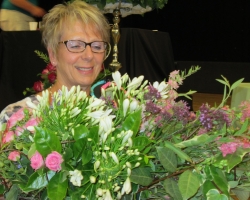