We visited the Land of Oz during Jo’s presentation ‘Over the Rainbow’. The first design was Dorothy’s basket using the colours of Summer with blue delphiniums and sweet avalanche roses together with soft ruscus, eucalyptus, ivy leaves and pink hypericum. Underwater lights  sparkles and flexi grass in a glass container set the scene for the cyclone over the rainbow – a   white and cream arrangement on a semi-sphere which included folded aspidistra leaves, bouvardia, spray white roses, white avalanche roses, hydrangea and spray chrysanthemums.

Dorothy’s silver shoes made an appearance  in the third arrangement, as an accessory against the spring coloured garden design using the picket fence. Forsythia, and laurel formed the background for daffodils, orange gerbera, orange tulips and craspedia.

The crown of the tree in the Enchanted Forest was  formed with garden foliage and garrya elliptica then enhanced with lime green Kermit chrysanthemums to give  contrast  against the purples and pinks of veronica, clematis, chrysanthemums,  moonlight carnations and aqua roses.

We all wish we could make a beautiful bouquet as quickly as Jo did for the fifth arrangement   She used folded aspidistra leaves, red lilies, red carnations and green chrysanthemums.

The Emerald City on the Yellow Brick Road was the focus for the  final design. Kentia palms, Bells of Ireland, fatsia and variegated aspidistra leaves created the pedestal shape before stunning individual green cymbidium orchid flowers were wired and grouped together to form the centre piece.

The arrangements which provided a wide selection of flowers and foliage  were varied in shape, texture and colour – all ones that we could take some ideas from to try at home and there were six very happy raffle winners at the end of the evening. All this, together with Jo’s  humourous, entertaining and informative commentary gave us a great start to our 2015 Emerald year . Thank you Jo. 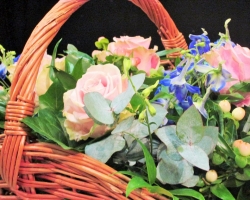 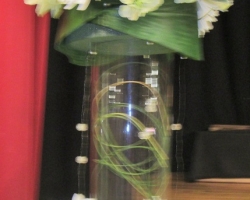 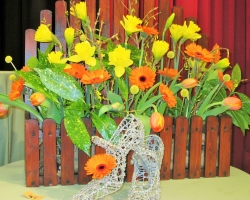 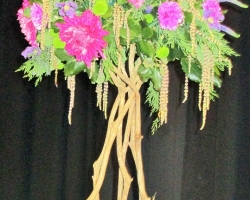 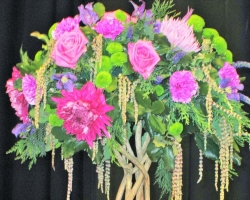 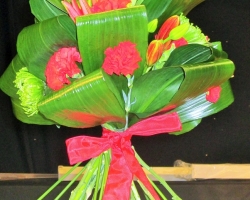 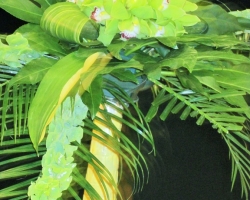 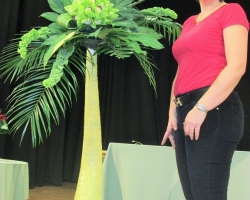