We were certainly in the festive spirit after Janet had entertained us with her ‘Christmas Creations’ on Tuesday.

Her designs were inspired by  the Christmas pudding, the Christmas tree, the nativity scene,  and an innovative way to use baubles and a hanging basket  in addition to giving  us ideas for table  and general Christmas arrangements.  Traditional green and red colours were used but it was good to see others included such as pink, lilac and orange  together with glitter and spray!

Thank you Janet for concluding a really instructive, exciting and varied programme of demonstrations this year.

Janet has kindly agreed to us including a couple of photographs. 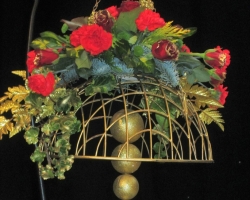 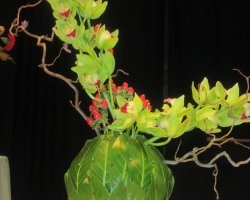