These were just a few of the many interesting ‘facts’ that Jackie included in her ‘Flowers and Fables’ presentation.

The six arrangements were varied in shape and design. The first one included palms, rosemary, and viburnum tinus together with ‘Heaven’ roses and pink carnations.  Orchids and red twigs were eye-catching in the second arrangement in an ’egg timer’ container.  Further single orchid flowers in tubes covered in red wool extended the design and were a very memorable feature (and idea!)

An attractive design using a ‘tapestry of foliage’ as the background for another pink arrangement of roses, carnations and alstromeria was totally transformed when it was enclosed in a cage of snake grass. The fourth arrangement included eunomynus, ferns, bergenia leaves, willow twigs and grasses together with cabbages and chrysanthemums.

I was the lucky winner of the next design using liatris, alliums, carnations and cabbages with ivy as its prominent foliage together with  conifer and viburnum tinus. Holly, ivy and bergenia formed the background in the final arrangement  for  beautifully  coloured chrysanthemums and alstromeria together with alliums and liatris.

A very enjoyable and entertaining evening Jackie with lovely designs and ideas that we can take home and try- thank you. 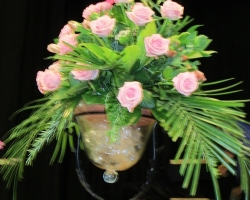 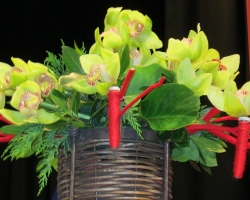 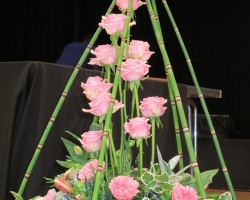 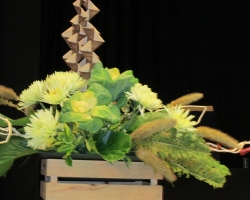 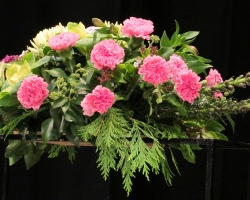 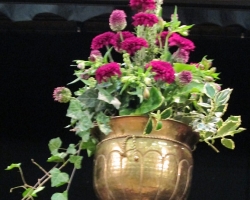 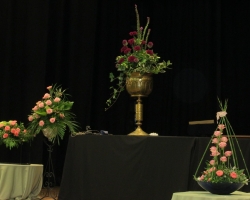