There were lots of very happy ladies this month as several of Lionel’s arrangements consisted of ‘duos’ so there were more raffle prizes than usual! They were all beautiful but also of a size and design that we could learn from and try to reproduce at home. Lionel’s love of plant material and gardening (especially the challenge of getting a cutting to take!) was obvious and a very wide variety of foliage was used throughout.
The first arrangement was in a traditional jardinière with golden privet, conifer, purple lisianthus and tangerine gerbera. Lionel’s presentation was entitled ‘In Touch’ and he used a glass container for the second design. Rubus, fern and variegated forsythia were used as the background foliage, Anthuriums were positioned ‘away from the other plant material’ to give the impression of flight and then hypericum berries were clustered in the centre.
Lionel reminisced with tales of his childhood and the family tricycle as he produced his ‘Touch of nostalgia’ design using yucca, white hebe, choisya ternata, ballota and euonymous before adding lime green carnations which followed the movement of the yucca stems. We were ‘In touch with the Orient’ for the fourth design using oriental style containers. Dry material gave height with wonderful hosta leaves, bergenia and phlomis leaves. This arrangement was completed with magnificent cymbidium orchids.
A vertical design using roses was next with a broad base of foliage (principally crypotmeria and skimmia) A horizontal arrangement was added to the front– using mainly the same foliage and flowers with the addition of some bottle brush. .
A Touch of wood was the last design using a central piece of wood with complementary arrangements either side. This had a link with the theme of gardening which had run through the entire presentation. A wide variety of texture, form ,colour and foliage was used including harlequin berberis, variegated wiegelia, white marbled laurel, phormium leaves, garden hypericum, echinops and fatshedera. Montbretia, gladioli, lilac stocks, pink lilies, pink carnations and red button chrysanthemums completed a beautiful final arrangement which included colours of all seasons.
Thank you for an enjoyable evening Lionel – hope the journey back to Braintree was uneventful. 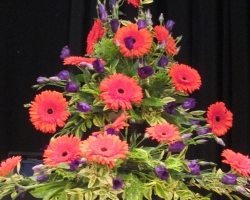 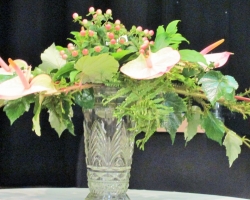 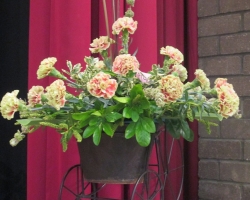 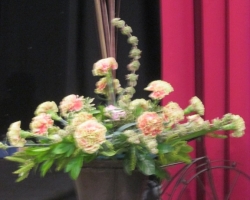 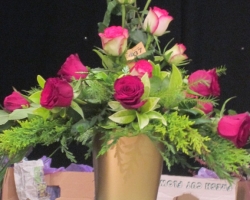 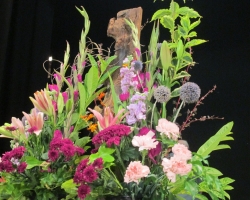 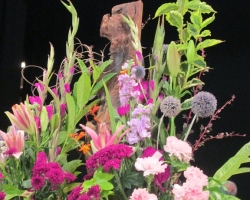