It has been a busy first few days of February! The society contributed to the Candlemas Festival at St Paul’s Church in Bedford. There are just a couple of pictures below to show the design we did around the oak pulpit. It was based on the verse ‘Though the approaching Spring is still a whisper, we celebrate her youth’. Thank you to anyone who helped in any way – it was great to welcome some different members onto the arranging team. It was good also to see the beautiful efforts of many members who were representing other organisations.

A few days later it was our AGM. During the business part of the evening, all the officers’ reports highlighted the very positive development of the society over the last year. It was pleasing that the Society had been involved in producing floral arrangements for four community events – thus increasing our profile in the area. Committee, volunteers and all society members were thanked for their continued support We were also delighted to present a cheque to Sarah Russell for £500 for the Tibbs Dementia Foundation (Music4Memory)

Following the formal aspects of the AGM we welcomed Victoria Diggle who gave us a very interesting illustrated talk ‘National Garden Scheme: horticulture, history and charitable giving’. Although many members are regular visitors to the gardens we all learnt something new especially about the origins of the Society and the amazing £50million that has been raised for charity over the years. Thank you Victoria.

We look forward to our first demonstration of the year next month when Gill McGregor will present ‘Spring Fever’. 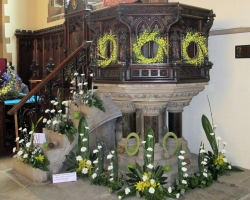 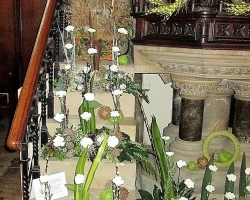