An outing not centred around flowers was a bit of a departure for us, but our trip to Birmingham Christmas market went very well. Special thanks to Rosemary who rallied her friends’ support to make the trip viable. You know, flower club people are such nice people.

Surprisingly, the market was not easy to find , but I have sent a message to say that as non-locals we would have appreciated more way-finding information.

On the whole the stall holders were friendly and helpful, and I think the market was representative of the flavour of the markets in Germany. It is true that there were several stalls of the same type, but the same often applies to any British market. As a group we enjoyed the delights of German mulled wine (Gluhwein), grilled sausages, pretzels, gingerbread, crepes and chocolate covered marshmallows. There were hand made wooden toys, Christmas decorations and jewellery for sale as well as a number of other different craft stalls. With music to listen to and street entertainers to watch, the time passed very quickly and it was late in the day before we realised our feet were aching.

A good day out.

Sheila asked one of the stall holders whether they sold a particular type of German rum and was told they only had French wines!! 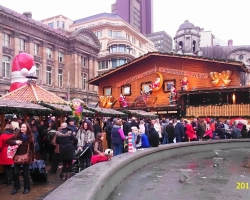 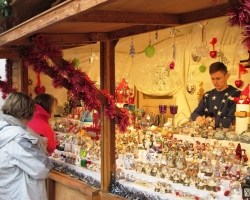 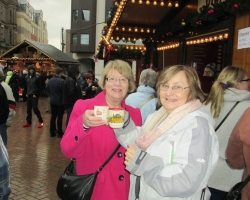 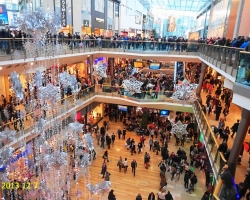